The Metropolitan Transportation Commission on Wednesday committed $9.3 million from bridge tolls for new commuter parking projects in Alameda County, according to the agency.

MTC designated $7 million of the $9.3 million to help fund the construction of a new parking garage near the Dublin/Pleasanton BART station. Their $7 million commitment supplements $20 million in state funds and another $7 million in vehicle registration fee money for the 537-space garage, according to the MTC.

Construction on the garage is expected to begin next spring, with the opening scheduled for mid-2021…(more)

Once construction is completed, we will begin testing to ensure that the tracks and other systems are fully integrated with the Muni system and ready for service. This includes integrating the automatic train control systems, radio and data communication systems, overhead lines, and customer information systems, ensuring that all of these aspects work for our two different types of light rail vehicles (Breda and LRV4). Like most major infrastructure projects, the Central Subway is incredibly complex. Accurately predicting a completion date is always a challenge, and there are always risks that can delay a project or add unanticipated costs…

Today, the SFMTA announced plans to undertake a comprehensive review of the Central Subway budget and schedule. The review will be conducted by the Central Subway Program’s new director, Nadeem Tahir, who joined the agency on July 15. It is expected to take approximately six weeks to complete and will identify a revised start date for service as well as evaluate the expected budget impacts of the delay. 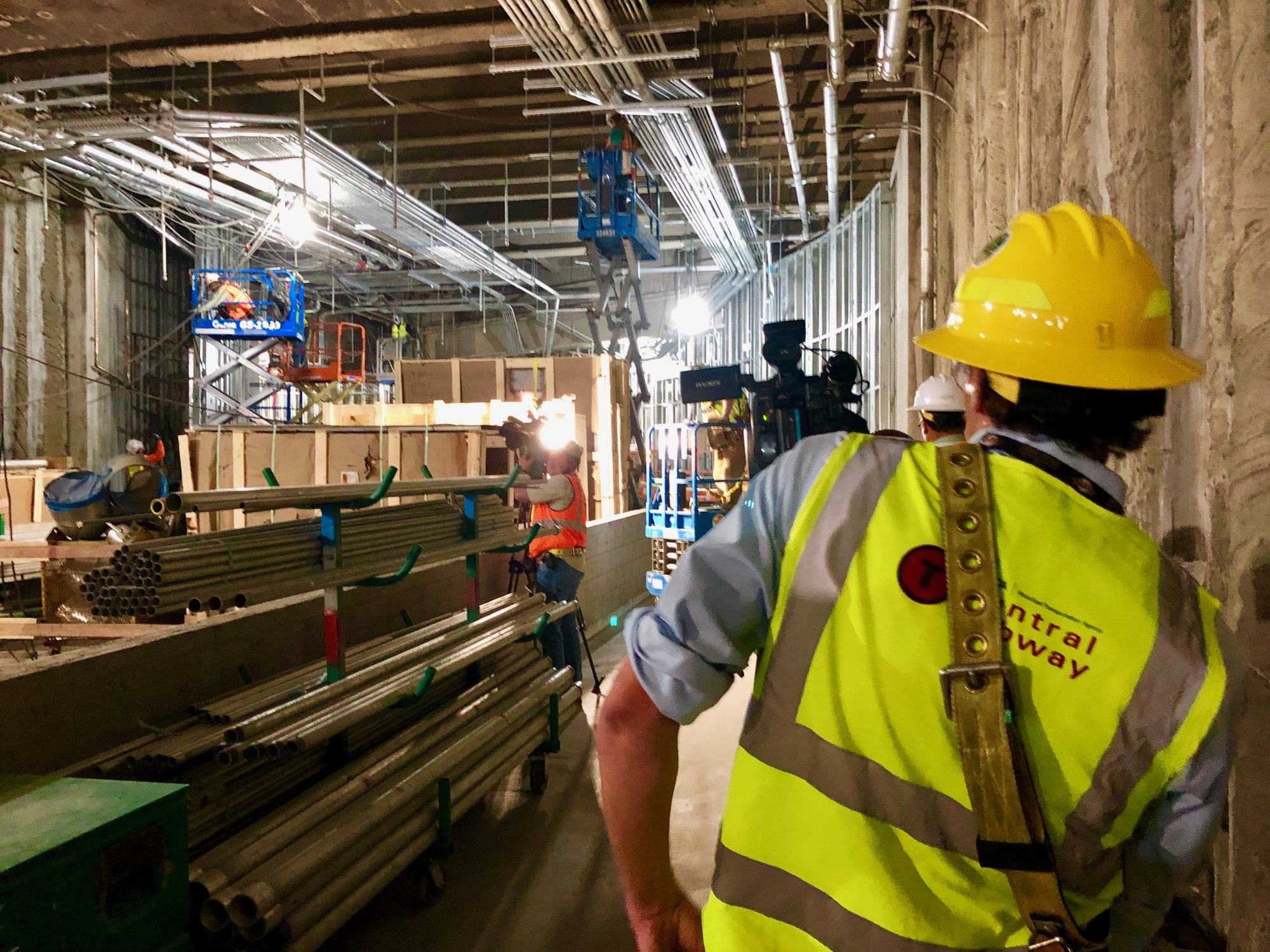 SAN FRANCISCO (KGO) — The new home of the Golden State Warriors, Chase Center, is just months away from opening in San Francisco’s Mission Bay, but traffic in the area is still a concern.

As part of an effort to curb the inevitable added traffic around the new arena, the city of San Francisco and the Warriors have teamed up to create a new plan — give every Chase Center ticket holder a day pass to Muni.

“We want people to take public transit to Chase Center, so we’re making it affordable and easy to do so,” Mayor London Breed said in a statement. “This breakthrough agreement demonstrates the commitment by both the City and the Warriors to get people out of their cars so everyone can easily get to games and concerts.”… (more)

“I look forward to joining the city administrator’s team and helping to advance the work of equitably, professionally, and compassionately serving the needs of the people of Oakland,” said Reiskin, who will start his new role Aug. 26, in a statement.

Reiskin’s last day heading up the SFMTA will be Aug. 14, and Tom Maguire — who currently serves as the SFMTA’s director of the sustainable streets division — will be the agency’s interim director as its board of directors conducts a national search for a full-time replacement.

The move comes following a particularly delay-riddled April day, when San Francisco Mayor London Breed pressured Reiskin to step down after underground rail service was suspended for hours due to a mechanical failure… (more)

The surveillance video of an incident in October — obtained by NBC Bay Area’s Investigative Unit – shows the first documented incident of a passenger getting caught in the rear door of a new train.

While Muni has since installed more sensors to prevent more door incidents, drivers point to the October incident as proof of another risk, one they call “whiteout.”… (more)

We have been hearing about this problem for weeks so it is good to “see” a video that clearly shows the problem. Hopefully the SFMTA will acknowledge the problem and fix it, or, do something as radical was bring back actual rear view mirror that used to work. Whatever it takes.

Since you’ve been delving into the Muni Metro subway operation recently, here’s a bit of history:

BART had the Muni Metro tracks planned out…..with Muni’s full knowledge and involvement…and depicted on engineering drawings by the beginning of the 1970’s, so I don’t think BART was “flying blind”. Muni did have rail operating experts on staff at that time.

LT Klauder &Co. (now LTK) was approved as the City’s system designer in 1969, and completed the Muni Metro design by the mid-1970’s. Yet it’s taken 45 years for the alleged need for pocket tracks to surface. Other possible causes of the Muni operating problems: defective LRV’s, Muni’s uniquely inefficient short-train operation, weaknesses in Muni’s operating and maintenance programs.

As I recall there is already a pocket track just west of the Van Ness Station. And there is also train turnaround and storage capacity just east of the Embarcadero Station. In view of this, why would there be a need for extra turnback capacity at Byrant and Harrison? In fact, since Byrant and Harrison are close to the Embarcadero Station and since the tracks passing these two streets are at-grade, why do anything?  And why on earth would adding an at-grade turnaround on one  or both of these streets take seven years to implement?

Comparing the single-subway Muni Metro and its 140,000 riders a day with the Paris Metro or the vast NYC subway system that carries over 5.5 million riders a day, is a bit of a stretch.

“When those subways are built, they should incorporate the design lessons of the past”, Kirschbaum said.

Yes, like running actual trains in the subway like every other subway in the world does, rather than settling for low-capacity, one and two-car LRV consists.

The procurement specifications for the Muni Metro LRV’s were completed  early in the 1970;s The decision to opt for high platform LRV’s was made before that time. BART and Muni fought over a number of points, but I don’t recall platform height as being one of them.

“The design flaw stems from hemming and hawing on Muni’s behalf”, he said.

Hemming and hawing over what? It would be nice to see a little specificity.

LT Klauder & Co. (LTK), was and is an experienced passenger rail design firm. Klauder was retained to design the system after the City and County of San Francisco had already made two fateful decisions: First it rejected the original proposal to run ten-car trains to State College with transfers to a J/N line at Church and to K/N and M/N lines at West Portal. Later City Hall decided that the riders of all five lines would have one seat-trips  to downtown SF.  Klauder therefore inherited the sticky proposition of merging five separate Muni lines into a single two-track Muni subway. The result was a coupled system featuring 4 and 5 car trains.

Two subsequent CCSF decisions, as ill-conceived as the first two, made things even more difficult. Because of objections from West Portal merchants (aided and abetted by downtown interests intent on using the $24.7 million in West Portal subway money to help build the Embarcadero Station), it was decided to eliminate the subways previously planned between the West Portal and the median of 19th Avenue for the M and the median of Junipero Serra for the K. This deletion eliminated any chance of holding to the careful timing needed to keep things on an even keel in the subway. And then, in the mid-1990’s, because of timing problems and allegedly insurmountable LRV coupling difficulties, it was decided to abandon the coupling operation all together, thereby cutting the length of the trains operating in the subway from Klauder’s four and five-car trains to one and two- car consists. This uniquely short-sighted decision left the Muni with two monumental operating problems. First and foremost it cut the peak-period carrying capacity of the subway by over 60%. Second it eliminated the flexibility that had been built into the original design, meaning that if anything went wrong anywhere, it would immediately tie up the entire subway operation. There’s more to this, but those are the highlights.

It’s easy to blame one’s predecessors when they’re not here to rebut you.

San Francisco’s troubled transit agency announced Wednesday that its director of sustainable streets will serve as the interim director.

Regional transit is moving into San Francisco. How do the residents like that?

The question is whether the district’s board will let her do her job.

Harriet Richardson, former Palo Alto city auditor, will be the first inspector general of the transit agency, which began service nearly 47 years ago and is scheduled to start running trains to north San Jose late this year. She starts work Aug. 5 and will have a $1 million annual budget…(more)

From the advocacy group’s petition page:

Public transit must work as one seamless, connected, and convenient network across the San Francisco Bay Area and beyond. Getting around on transit must be as fast and easy as driving a car. Coordinated bus, rail, and ferry routes and schedules should encourage effortless transfers. Consistent and clear customer information, branding, and maps should make using transit simple and dignified…

Just last month at the nine-member Clipper Executive Board of the Metropolitan Transportation Commission, managers of Caltrain, BART, AC Transit, VTA, and other agencies voted not to even study fare integration, despite the pleas of transit advocates from Seamless, SPUR, and Friends of Caltrain. This makes statewide efforts to integrate transit fare systems look like a mere academic exercise…

The transit advocates hope that, with this petition, those new managers will be encouraged to take a more regional perspective.

“The petition has been in the works since before the Clipper vote but the timing has worked out well such that we can now use the petition to channel people’s anger about that event into action, and hopefully get that study back on track,” wrote Griffiths.

Read more about the group’s Seamless Transit Principles. And be sure to sign the petition…(more)

The terrible logistics of the Muni Metro subway system — which Muni did not even design themselves — are in line for an overhaul as the SFMTA tries to get its rail service back on track.

A fun (but facepalm-inducing) fact about Muni’s almost daily rush hour meltdowns is that the underground tunnels are inefficiently designed in part because Muni did not even design them. BART designed much of the Muni Metro system, apparently with little success getting feedback or input from Muni, which was under-funded and indecisive at the time the tunnels were getting designed. In the late 70s and early 80s when the current underground tunnel system was being planned and constructed, Muni failed to inform BART of very fundamental decisions like what kind of trains they planned to use in the tunnels ,or the types of platforms they needed. “Muni had not decided how they would operate the tunnels,” transit activist and historian Rick Laubscher said at a June SFMTA Board of Directors meeting. “BART was flying blind.”…(more)