Andy Byford, a veteran of Transport for London, Sydney’s RailCorp and Toronto Transit Commission, takes ‘the biggest challenge in the most wonderful city’

Now the reverse is happening. Andy Byford – who grew up in Plymouth and is a veteran of Transport for London, Sydney’s RailCorp and the Toronto Transit Commission – arrives to take on New York’s rammed and creaking transport system, which this year suffered a “summer of hell”. Long-deferred repairs wrought havoc on the already overburdened system, leaving passengers stranded on sweltering platforms and captive in immobilized subway cars…

This is the future of world class cities? Crowded, crumbling, sweltering subway cars?

He has already floated potentially unpopular ideas, like an end to 24-hour service on some lines, and closing others for repairs. “It’s a harsh message but there will be no gain without a bit of pain,” Byford said…

“He basically was looking for, in the short term, quick wins,” said Steve Munro, a veteran Toronto transit activist and blogger. “That’s the basic thing any new manager does: they come in and want to be seen as doing something. So he went after the stuff that was relatively easy and cheap to implement.”…

How do we go from the SFMTA’s billion dollar scam projects to quick, cheap and easy solutions? Maybe we need a new chief that thinks that way?

“There’s a reason why that equipment is under strain. It’s old and it’s trying to carry more people than it was ever designed for,” Byford said…(more)

The trick is knowing where to set your limitations before you reach them.

Having opened this fall with a 43-mile leg of its eventual 70-mile route, SMART connects Sonoma and Marin counties by rail — and it’s fun to ride.

For all the grumbling about how the Bay Area is sclerotic when it comes to ambitious transportation projects, trains are enjoying something of a resurgence. High-speed rail seems inevitable, BART opened an extension to Warm Springs with further infill stations planned, Caltrain electrification seems likely, the much-delayed Central Subway chugs along, and Muni may yet extend the F-Market streetcar to Fort Mason. Down south, car-choked Los Angeles plans major subway expansions along its Purple Line ahead of the 2028 Olympics.

The rail-scape is impressive. While U.S. Sen. Dianne Feinstein and state Sen. Mark DeSaulnier talk about building another Bay crossing for vehicular traffic, perhaps the time is right to relieve overcrowding and delays with a second Transbay Tube instead. That idea sounds farfetched, but the county that famously declined to participate in the original BART system — Marin — now has a functioning train running from downtown San Rafael to Sonoma County Airport in one hour and seven minutes.…

“They’re really learning how to transfer to buses to get to San Francisco or get to the Larkspur Ferry,” she adds. “People here are learning transit because they haven’t had transit. I’m watching them learn schedules and meet ferries and they’re so excited.”… (more)

In its annual report to the California State Legislature, which was release today, the California Transportation Commission calls for the formation of a special committee to study and make recommendations for the future of the North Coast Railroad Authority.

The state agency, now nearly 30 years old, holds title to the railroad tracks that run between Humboldt County and the Bay Area. Though some freight has lately been moving on the very southern end of the line, no trains have reached Humboldt County in two decades.

Back in July, the state commission — whose mandate is, in part, to advise the legislature on transportation matters — held a hearing on the railroad authority’s dire finances, and asked it to produce two documents: a business plan and a “shutdown” plan. The authority’s response, if any, has apparently been unpersuasive.

”To date, the NCRA has been unable to produce a plan that makes the business case for its existence,” writes the commission in its report to legislators today… (more) 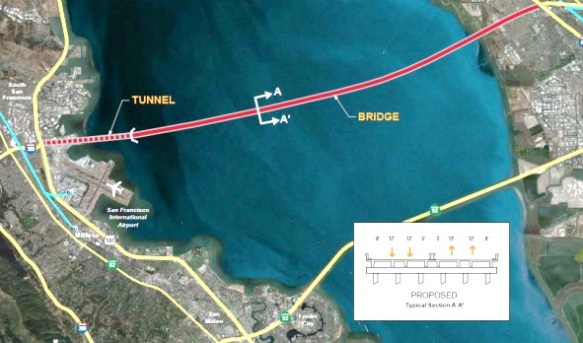 Sen. Dianne Feinstein, D-Calif., is pushing to have a new bridge constructed across the Bay, midway between the Bay Bridge and the San Mateo Bridge, in the hopes of alleviating congestion on those two bridges.

Feinstein, along with Congressman Mark DeSaulnier, D-Concord, sent a letter Wednesday (Dec. 6) to Metropolitan Transportation Commission (MTC) Executive Director Steve Heminger in support of the new bridge, which has been discussed for decades. Over the years, it’s become known as the “Southern Crossing.”

Their letter also says that MTC’s plan to put a $3 toll increase on the state-owned Bay Bridges won’t “come anywhere close” to reducing congestion on the Bay or San Mateo bridges.

Nov. 27–Toby Levine braced for noise and pollution 10 years ago when she moved into San Francisco’s Mission Bay neighborhood, two blocks away from the Caltrain station at Fourth and Townsend streets.

Yet the pervasiveness of the diesel dust surprised her. It frosted the geraniums on her balcony and caused the leaves of the podocarpus trees to droop and turn brown. It stuck to her windows, freckled her neighbors’ deck furniture and collected in air vents.

“It wouldn’t be so bad if we were dealing with a less-dangerous chemical, but diesel is poison,” said Levine, who for years has led a neighborhood campaign to get Caltrain to minimize the emissions from its locomotives while neighbors wait for the rail system to go electric in 2022.

At the San Francisco station, which has 12 tracks, the first trains start rolling around 4:10 a.m. every weekday, and the last one pulls in at 12:05 a.m. During the slower-paced weekend schedule, trains run from 8 a.m. until midnight.

So for much of the week, diesel wafts through the air up to 20 hours a day in a booming new neighborhood. Plus, Caltrain’s fleet is more than 30 years old — “near the end of its life span,” said spokesman Dan Lieberman — and its engines don’t burn fuel that efficiently.

To further complicate matters, there are no state or federal laws that regulate idling diesel locomotive engines, so neighbors have depended on the rail line and its contracted manager, TransitAmerica Services, to write their own rules… (more)