Some San Francisco residents are roaring over a study to explore tearing down a portion Interstate Highway 280 in Mission Bay, which could clear the way for a Caltrain extension downtown.

But two sets of blueprints obtained by the San Francisco Examiner paint contrasting futures of I-280, including an effort to put the brakes on the proposal decades ago.

One set of blueprints, drawn in 1969, planners say shows evidence that to build a new Caltrain extension, I-280 must come down — no questions asked.

The other set of plans, two decades old, purportedly shows a road not taken — how the Caltrain extension could be built without the need to tear down I-280.

Meanwhile, the latter idea is gaining support. After a packed public meeting last month when local residents of Potrero Hill and The City’s southeast booed and hissed over the proposal, political heavyweight John Burton, the state’s democratic party chair and a former congressman, joined a chorus of voices denouncing the plan.

“Well, I think it’s stupid,” he told the Examiner of the possibility of tearing down I-280. “It’ll clog up Potrero.”

He’s not alone. Former Mayor Art Agnos previously told the Examiner he would personally launch a campaign against the I-280 teardown if it were pursued.

Planners are now preparing for another meeting on March 30 to discuss the possibility of tearing down the freeway, which they argue will “open up” Mission Bay to the community.

Plan 1: Narrow Freeway Must Come Down

Blueprints of I-280 drawn in the 1960s by the Department of Public Works show one glaring issue, planners argue:

I-280 is too narrow to bore a tunnel underneath…

When told I-280 must come down, a retired Bay Area engineer had essentially one reply: Nope.

Gerald Cauthen is a retired engineer from consultants Parsons Brinckerhoff Quade & Douglas, Inc., based in San Francisco. While most retirees keep knick knacks from the office, like a favorite paperweight, Cauthen kept blueprints.

Among them are a set of drawings labeled with the Muni “worm” logo, titled “Phase 1 Design Conceptual Engineering Drawing,” which was last redrawn Nov. 5, 1993.

The plans show Caltrain tracks to the Downtown Extension depressed only five feet below the surface, instead of tunneling underground.

To join Mission Bay with the rest of The City, the blueprints feature a construction nowhere else in San Francisco — an underground roadway, and accompanying pedestrian passage.

It’s far better, Cauthen said, than tearing down I-280 and turning the freeway into a boulevard…

Blueprints #1: Shows the narrowness of I-280, which planners argue mean the freeway must come down to tunnel. (Click here to view). 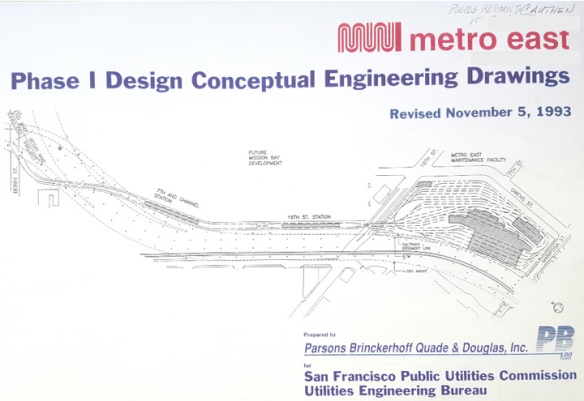 “Forcing us to create depressed canyons to connect Mission Bay to the rest of The City would be problematic from a land use and transportation standpoint,” Reiskin said on KALW radio, in mid-March…(more)