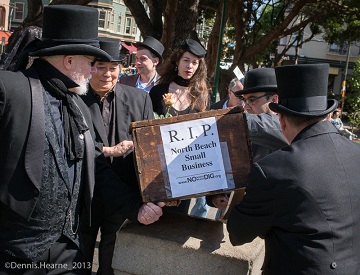 UPDATE:  CENTRAL SUBWAY OVERBUDGET & CONCEALMENT
Known since October 2012, schedule and cost problems have been concealed—to evade scrutiny of budget hearings, to take $9 million+ from Muni operating funds for the Pagoda Theater site, to waste $70 million for an empty northern tunnel and to force taxpayers into future debt load.

A recent report by a federally placed overseer monitoring the $1.6 billion Central Subway project laments that the controversial line is at risk of falling significantly below Federal Transportation Administration minimums for both time and money contingencies.
The minimum cost contingency the FTA will allow for the project is $160 million. The Central Subway, however, appears poised to drop nearly $100 million below that figure. The lowest of three bids received for “station and systems/trackwork” came in $90 million to $120 million more than anticipated. “If awarded, project cost contingency will fall to approximately $65 million, which is significantly below the required level,” notes the report.

The CSP [Central Subway Project] is planning to submit justification to decrease the minimum schedule contingency based on risk.  The PMOC has been requesting justification for the reduction in schedule contingency and/or a Recovery schedule for the CSP since October 2012.  The PMOC, FTA, Region IX and the FTA Headquarters are concerned that it has taken the CSP so long to address the serious deficiency.”

Critics with Save Muni, a group that opposes the subway, contend the report supports their argument that the subway will have huge cost overruns that will have to be paid from Muni operating funds, delivering service cuts.

Cost remains one of the biggest issues. The $1.6 billion price tag is far above a $647 million estimate from 2001. Last month, the low bid to build the stations and tracks came in $90 million to $120 million higher than the MTA’s estimate. At the same time, concerns emerged that a complicated plan to pull tunnel-boring machines out of the ground in North Beach could cost more than anticipated.
It isn’t unusual for large public works projects to go over budget. An oft-cited 2003 study by Oxford University professor Bent Flyvbjerg found that on average, rail projects went over budget by 45%, with bridge and tunnels over by 34%. And a 2009 Federal Transit Administration risk assessment calculated that the Central Subway had a 30% chance of coming in within the $1.6 billion budget.

It warrants mentioning that the nascent Central Subway is currently pegged to eat $15.2 million [annually] from the agency’s Operation and Maintenance budget — and any cost overruns for the $1.6 billion endeavor will be bled from local funds that could otherwise make vehicles go or fix them up.

One prime example is Muni, whose failing performance was documented in a city hearing just days before the mayor’s budget was released. Its on-time performance is 58.7 percent, far below the voter-endorsed goal of 85 percent. In a city where driving, parking and buying gas should push people on the bus, the opposite is happening. Muni has fewer riders now than it did a decade ago, the only major transit agency to lose customers among the nation’s top six transit districts.

Below: The updated budget analysis reveals even larger cost overruns.  Instead of cutting Central Subway costs, SFMTA’s misguided reaction has been more Muni service cuts, missed runs, switchbacks, “holiday” schedules, increased fares/ fees/ fines/ meters and a 2014 Bond Measure that diverts funds to the Central Subway.  Instead, a first step is to save $80 million by deleting the empty tunnels from Chinatown to North Beach and the wasteful Pagoda Theater site.

SaveMuni.com:  Budget Update,  June 6, 2013
CENTRAL SUBWAY OVERBUDGET:  FISCAL CRISIS CONCEALED
Without the sunshine of independent audits, huge cost overruns for the Central Subway Project are being concealed—to force city officials and taxpayers into future debt load.
According to the San Francisco Municipal Transportation Agency (SFMTA), all project contracts have been awarded or bid.  Based on available data, contingency funds are now at insufficient levels or gone altogether—even before major construction begins for tunneling and deep excavations: